From Sea to Tree

Hi Everybody! Seems I have been very tardy with the blog and thanks for your notes of concern.....I have many excuses, the latest one being I have just returned from cruising around the Mediterranean and Aegean Seas on a Turkish Gullet - a beautiful handmade wooden Sailboat. My new Camino has turned out quite nicely thus far and I am endeavoring to get a load of pictures up tonight. Tonight Jan and I are staying in a tree house in Olympos Turkey - seems to be all the rage here....sounded better than it looks. We will definitely miss sleeping under the stars on the boat. Turkey is a huge country....who knew? Not us. For a look at some of it, check back - I am going to have to work backwards thru Turkey with the pictures and stories.

Up and out early early as owner Adam kindly offered to drive us the 20 mins or so to the bus station where we were to catch our coach to Fedihye, the starting point of our Blue Cruise. Super nice guy, Adam, who would have offered the same service to any of his guests but seeing as it was HIM who drove us, not one of his staff, I think he wanted a little extra face time with my friend who stole his heart. Awww… So sweet.

Four hours on yet another bus (all trips seem to take 4, 5, or 6 compact hours almost exactly to the minute. Strange.) and we are eventually escorted to our awaiting sailboat. Wow. Really. Wow! I’ve never been on anything other than ferry boats or dive boats so THIS was exciting. Deb has been on lots of cruise ships and sail boats and everything in between and even she was pretty excited about this one. We were shown to our little cabin with its bunk beds and own private bathroom and both of us were pretty darn impressed with the setup. Big decks on the front, top, and main part of the boat with cozy sitting areas for lounging about, massive masts with sails tucked away (as we had huge distances to cover so the engine for mobility it would be), and a proper cool big wheel to steer us straight and clear. The boat looked brand, shiny new with its gleaming polished wood and brass and clean, crisp tarps, coverings, and ropes. This is a FANCY boat! Apparently not the usual for these kinds of cruises so how we managed to snag such a sweet ride, I don’t know, but I wasn’t about to ask either. Let’s get this baby off to sea!

Our mateys included 6 Colombian university students, early 20s and oh so cool, a Turkish mom, her adorably awkward teenage son and his best friend, and a French couple with their 18 month old baby. We were all a little hesitant about spending the next four days on the water with a baby but they had been traveling via camper van and had this kid under control. Seriously. Couldn’t have asked for a better bunch. It was mid afternoon, hot and sunny with a calm, blue sea and a bright clear horizon ahead of us by the time we pulled up anchor. Ahoy all! Let’s set sail! (Or whatever pirates say. What DO pirates say???) It doesn’t really matter. I’m going cruising.

So the next four days consisted of eating, sailing, swimming, snorkeling, chatting, visiting small beaches, bays, or villages, watching the incredible scenery pass by, and napping. *sigh* another one… *SIGH* Heaven. Now, I’ll be honest, it wasn’t all smooth sailing. Despite the fact that the seas were calmer than the Captain had seen in quite some time, I was spending many, many, MANY long, consecutive hours on a boat. It didn’t matter how flat the water was, I was rocking. When I needed to go into my cabin for whatever, it was with a quick step and focused eye as being below deck sent my stomach churning. I was jumping in the water at every stop we made to try to settle the wobblies but by the time we finally stopped to explore a bit on land, I was green. Butterfly Valley, stunning and reminiscent of Thailand days of long ago, only a vague glimpse as I spent most of our visit time there spilling my guts in some bushes. Shame. That being said, so did most of the Colombians as well. We were needing a bit more time to get our sea legs steadily underneath us.

Deb, however, is a rocking and rolling queen. The rougher the weather, the happier she is. I slept outside, wrapped in blankets on deck every night not only because it was so perfect to be on the water under the stars in the cool fresh air but because there was simply no way in hell that I would have been able to stomach any length of time in that small (but very pretty!) cabin. The weather was heaven but even if it hadn’t been, I’m not sure I would have been able to handle it under there. Oh how I envy you, Deb; green with seasickness and envy.

As the second day dawned and my time continued on board, my stomach settled and the spewing stopped. Over the next couple of days, there was no more vomiting. I went a little stir crazy from time to time, I want to get OFF the boat, why can’t we get OFF?! but that too passed. By the end of our journey, the wooziness had disappeared, I was able to spend a little longer down under (but not too much longer) and I had found a brand new happy place. I see how people can fall in love with this kind of thing. I was SAILING! (well, not “sailing” because we were using the engine, but it was still a sailboat!) you know what I mean.

The days blurred by and it truly was a really great trip. Loved the group we had on board, jumping into crystal clear waters off the side of the boat within the first 10 minutes of waking up to start the day, seeing some beautiful beaches and villages along the Aegean and Mediterranean coast, and oh yeah, even managed to go for a dive. Kinda disappointing. Sad little spot with nothing to see for a good chunk of cash, but it was a dive and I’m happy diving so nice little bonus to the trip plan. We had a goofy little dance party on board one night and were taken to a “disco island” another night to meet up with some other “Blue Cruisers”. The other Cruisers only lasted an hour or so but our bunch danced the night away. Slight hangovers from both nights were instantly cured by an early morning jump in the sea. Just TOO much fun!

Not too many stories to tell of this journey but the pictures posted on facebook give a pretty good idea of how amazing the trip was for all of us. We finished our sailing near a small, strange town called Olympos where all places to sleep claimed to be “tree houses”. We had no choice but to stay in Olympos as it was too late after getting off the boat to really get to anywhere else significant. Our “tree house” was a wooden structure on stilts crammed in with several other wooden huts in an orange / lemon orchard. Two flat mattresses on the floor, that’s it. But it was cozy and very clean so we’re not picky. Again, reminders of my days in SE Asia. There wasn’t much to do other than a quick walk to a not so nice pebble beach, rest up, chill out, and book tickets out for the next day. So that’s what we did. With the fabulously salty memories still lingering, we made plans for our next delightful destination… Cappadocia, here we come. 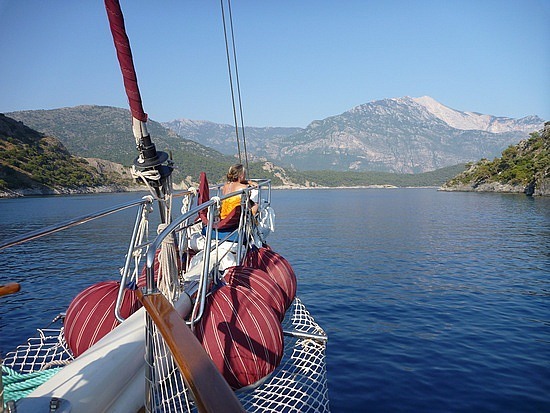 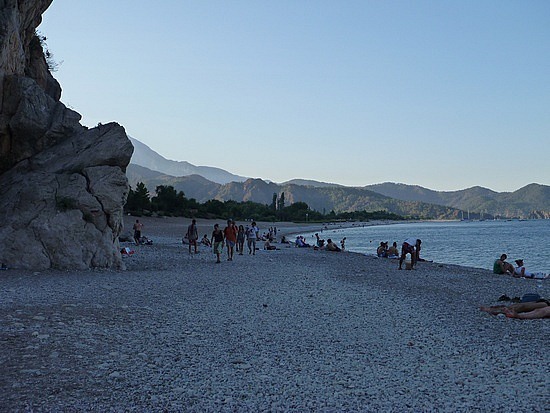 Too rocky for me 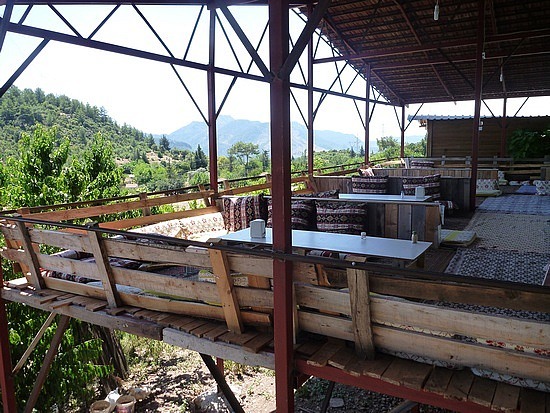 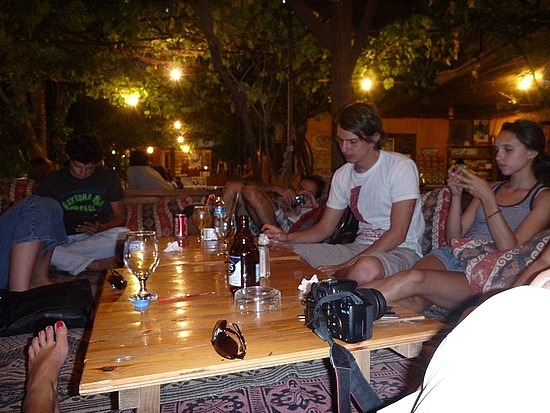 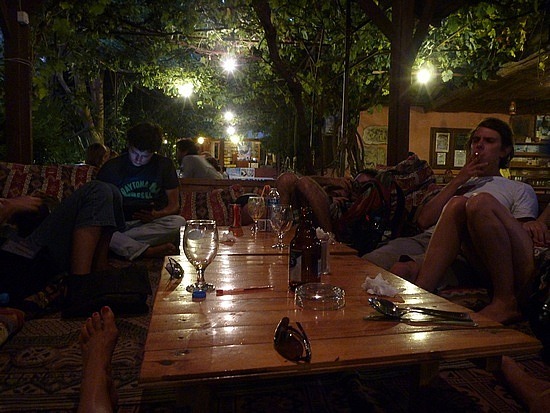 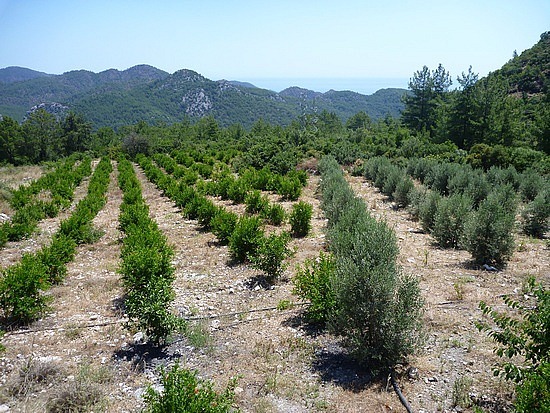 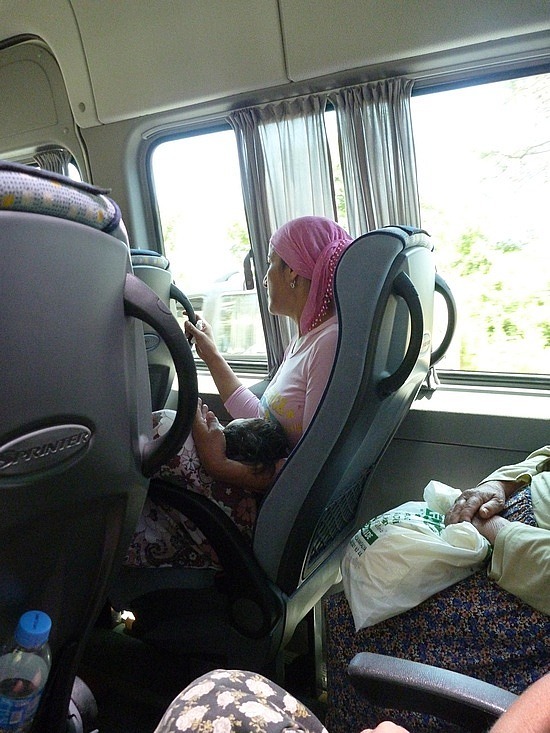 Gypsy scammer on the bus 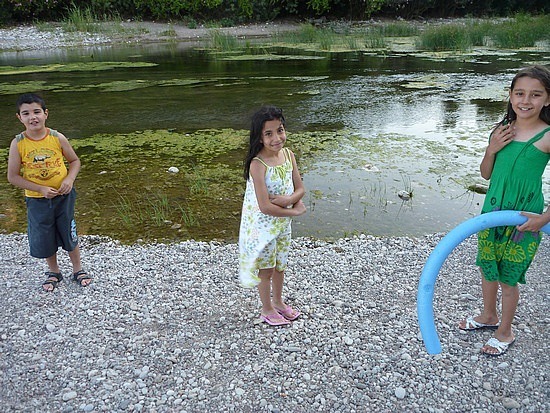 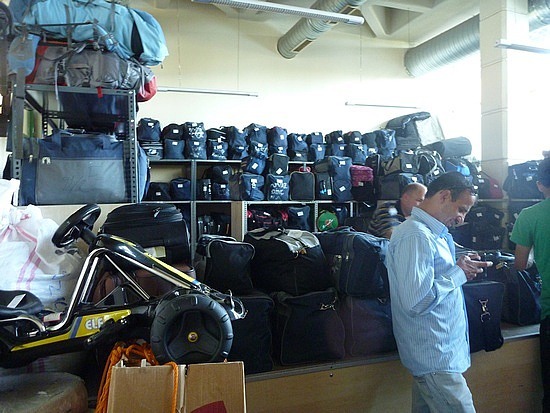 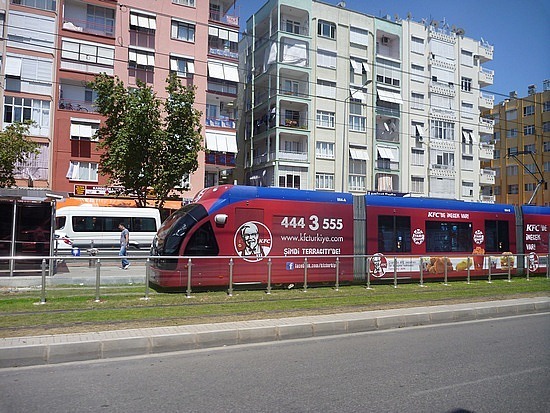 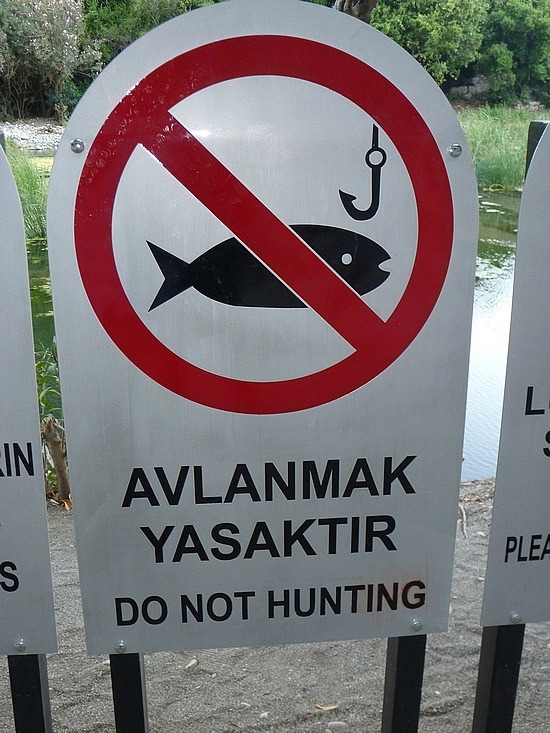 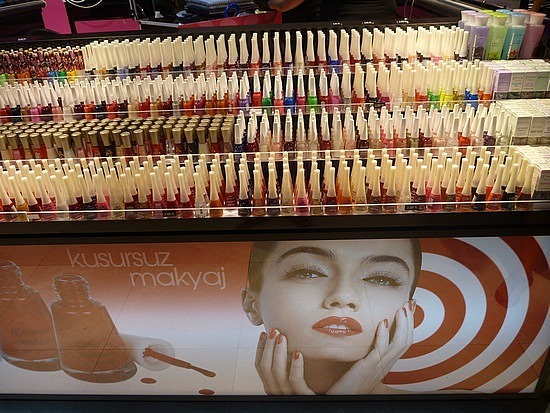 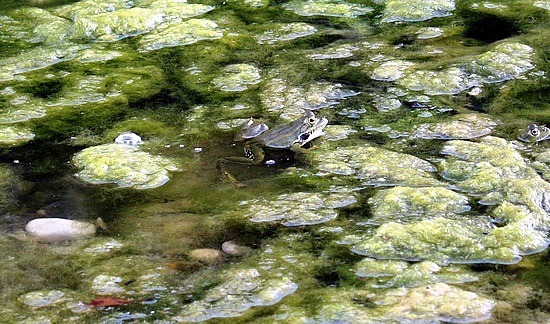 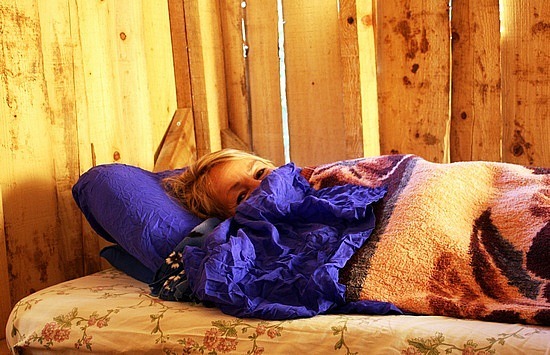 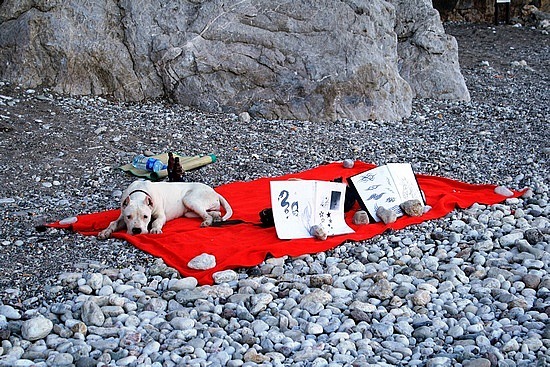 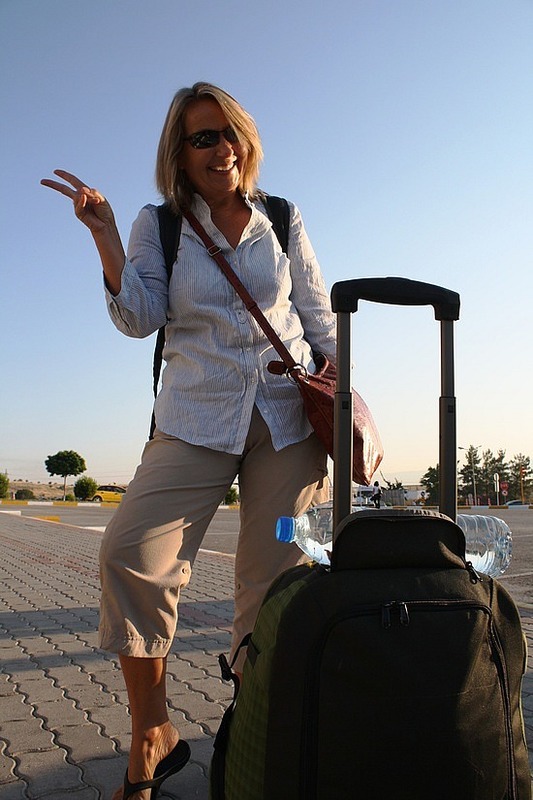 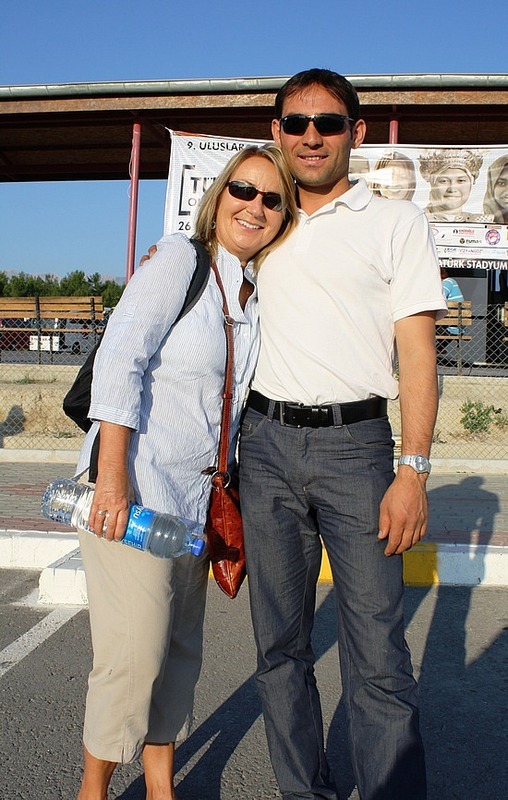 Posted by EverywhereStill 16:00 Archived in Turkey